Embracing The Chunibyo: How Love, Chunibyo & Other Delusions taught me about staying young at heart.

There are certain stories that withstand the test of time and manage to find an engaging audience of all ages. An example of this would be Where the Wild Things Are by Maurice Sendak, a story about a child named Max whose behavior and imagination runs so wild he becomes lost in another world. For years to this day audiences felt close to Max, but in the same vein shared the feeling that growing older has left behind the imagination that comes with being younger. Some of us abandoned that behavior when we were in elementary school, and surrounded by friends with real-life aspirations. But some of us, as Hikaru Ijūin would speculate in 1999, would act in that behavior for years even into middle-school.

Hikaru Ijuin coined the term chunibyo specifically for teenagers as they aged past elementary school into middle-school and high-school, who still held the wild imagination of much younger kids and were focused on otherworld fantasies. Instead of focusing on sports or higher education, a chunibyo student would instead believe themselves still a part of their own fantasy, harboring super powers or other extreme delusions. After 1999, Ijūin would return to his definition, classifying different types of the chunibyo trait, and also explaining the importance of studying it in psychology.

In fact, the chunibyo trait was something that became more and more popular in Japanese literature and mainstream media, so much so that a light novel series was written titled Chūnibyō demo Koi ga Shitai!  Which translates to Even with Eighth-Grader Syndrome, I Want to be in Love! (Eighth-Grader Syndrome is an english speaking translation, which I find a bit broad). The novels gained popularity and won some awards. This would lead to the creation and development of the popular anime TV series Love, Chunibyo & Other Delusions. The two season show would air between 2012-14 (both available on Netflix) and also produce two full-length anime feature films. It’s a show I discovered very recently, and one I will hold onwards as a new personal favorite. For me, the term chunibyo was blanketed as a broad term to cover a vast behavioral trait. Our lead chunibyo in the TV series is Rikka Takanashi, but she is not the protagonist. Our protagonist Yuta Togashi is in high-school, focused on fitting in as much as possible and leaving his past behind. In an attempt to re-do his social status, Yuta abandons his delusion as the “Dark Flame Master” in Junior High, which embarrasses him to this day. However, Rikka is still “delusional” holding the power of having other-worldly powers including an all-seeing evil eye she keeps behind an eye-patch. She fits into the narrative as a loving opposite to Yuta, who is simultaneously stuck with and enamoured with Rikka. Yuta wants to protect Rikka from feeling the shame of being a punch-line at their new school, but with the encouragement from two other classmates who share her personality, she continues to believe in the dark world. Add in the arc of Yuta and Rikka falling in love with each other, and you have Love, Chunibyo & Other Delusions! 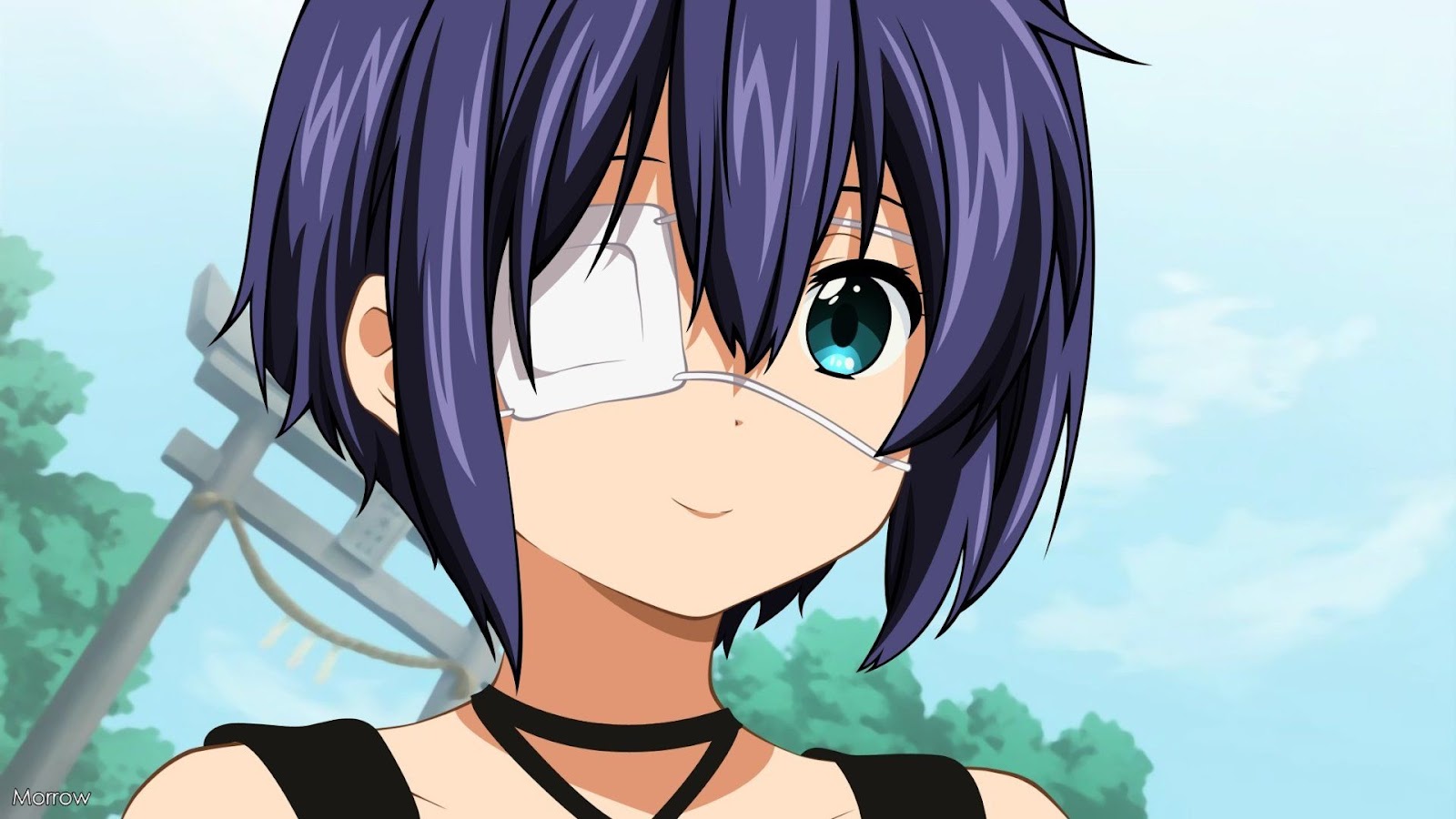 What initially grabbed me about this series was the treatment of Rikka’s delusions and her behavior at school. When surrounded by her imaginative friends, she engages in some of the show’s funniest moments, falling into grand-scale other worldly battles with giant weapons. When anyone outside of these two watches, it just looks like two silly kids playing pretend. On top of that, Yuta’s behavior around Rikka and her friends is usually serious, but he sometimes falls nostalgic for that lifestyle of his. And when he falls for Rikka, will he encourage the behavior to be with her, or strictly shape her into maturity for his sake? Without going too deeply into any spoilers, Season 1 poses this question and the second season explores the reality of the relationship even deeper. Rikka goes through changes, she expands and allows her maturity to adapt to Yuta. She never stops being a chunibyo though, at least in my eyes, and Yuta also returns to his old ways. The show does go into a deeper psychological approach at the past of Rikka specifically, and what perhaps “stunted” her behavior from early trauma and loss. But the show also deftly balances humor with its seriousness, never straying away from being a romantic high-school show. It’s a genre I’ve always enjoyed, and the elements of being young, confused and ambitious as a student are all present. And for myself, discovering this show also struck a chord for me and my own childhood. 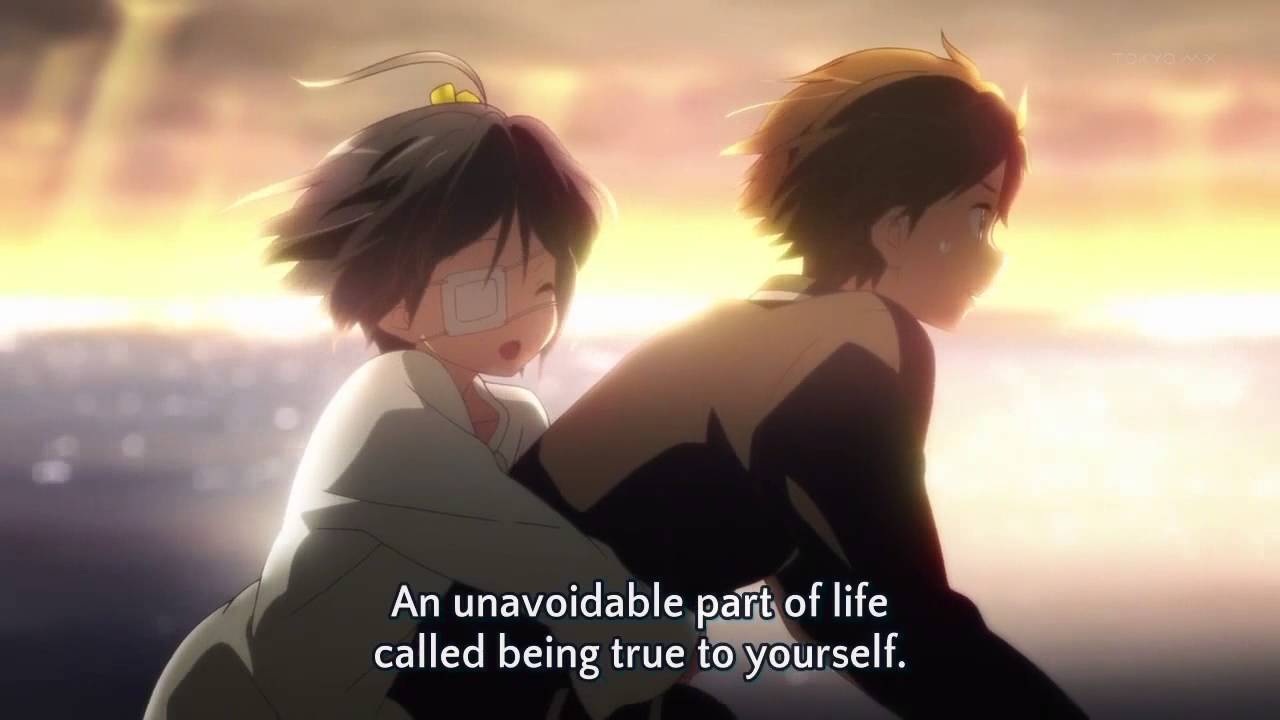 Like Max in Where the Wild Things Are, I was a young and often lonely child who spent hours in my own wild world. Like a young American chunibyo, I also carried this behavior far into middle-school, perhaps even past that. I would often play out “movies” by myself encouraging solo experiences over real-life friendships. I used this as a guise for my desire to be a director at a young age. I always wanted to make movies, and so without a camera or any actors, I would. By myself. Was I lonely, or acting out past my years to hide behind a lifestyle that made me a social outcast? It’s not my place to truly understand, but having grown older it humbled me to know I’ve always had this creativity inside me. Discovering the chunibyo let me reminisce and even apply the character to myself. The chunibyo is not necessarily an appropriate character, but they have their place in the development of a creative person. If I was younger and had a show like Love, Chunibyo & Other Delusions available to watch, it may have put my whole life in perspective. But now, in 2021 I look to this show with a warm heart. And I even see chuunibyou characters in other anime and manga series. I think when the negative aspects of the lifestyle are looked past, kids such as who I was can find solace in knowing they’re not alone. Delusions or not, we all have our own growing experiences. It’s ok to find positive ways to cope, and this show proved to me at least, that finding comfort within myself in a non-social technique is not wrong. We can all learn a little lesson from characters like Rikka, and we might even all have a little dark-eye magic in us to this day.